Last year, I was awarded a small grant from CHASE Feminist Network to support a performance entitled HOW ARE YOU? #Sergina’s Participatory Soap Opera about Wresting with Wellbeing in the Digital Age. Produced and performed with my long-term collaborator Vladimir Bjeličić, the four-hour performance took place at ONCA in Brighton last June. It was a performance by #Sergina, my mobile-phone obsessed, data-discharging drag queen alter ego, who emerged out of parties in Berlin more than a decade ago, but has since evolved into a multi-bodied identity who is played (& written & created) by many others besides me. Through her, I explore questions about the body in relation to the data it generates, as well as issues of love, lust and loneliness in the digital age. The performance was about the question HOW ARE YOU? and the frequent emptiness of it, the aggressiveness of it even, used as a space filler, a behavioural ritual rather than a real enquiry into someone’s alright-ness. A slogan for Vodafone for four years, HOW ARE YOU? has, over time, lost its meaning. Question asked. Time allowed for a short response. On with business.

But business has been ground to a muffled halt. Due to COVID-19, many millions of people across the world are not really ok at all, and those of us lucky enough to have homes have been instructed to stay in until it’s deemed safe to come out. As a result, almost all our interactions have been forced online. On 31st March, in place of what should have been a physical installation at Goldsmiths, Vladimir & I performed a digital re-jig of HOW ARE YOU? via Zoom, with a livestream from YouTube in world that looked, felt and sounded very different – as did this core question of wellbeing.

At ONCA, the gallery was divided by a curtain into two spaces – front, and back. The back space was the office area / control room, where the #Sergina agents (me & Vladimir) were busy inputting data gathered from the visitors. Although we were sitting opposite each other at the same table in the same space, Zoom was nevertheless used throughout as the main means through which we were connected (never any eye contact). Through Zoom video, our wigless but identically dragged up faces were projected onto the walls beside and behind us, while the Screenshare function enabled the showing of videos and Instagram-live feeds of commissioned dances. With the large windows looking out onto St George’s Place, the front space served as a welcoming atrium to visitors complete with instructional videos and Gallery Girls in branded #Sergina T shirts, and as a stage for paid-for dances and selfies with #Sergina during later acts, which the audience could commission.

Whilst the dances or selfies did not take place in the digital re-run, (the online performance was one hour long rather than four) in both editions the audience was presented with a set of questions about how they feel – about themselves, people around them, and society at large. At ONCA, people had the choice to respond in person, on their phones via a questionnaire, or by filling in a paper form. In the digital version, it was in person via Zoom or through the (slightly modified) questionnaire, which could be accessed and completed without being part of the Zoom chat. Taken word-for-word from an Open Call issued by Istanbul based art collective Mamut in 2017, the list of 30+ questions forced a sticking-with the subject: How are you feeling? How are you feeling right now? Can you make others feel good? What is unity? Can we make each other feel good? Can this moment be good for us? The questions were asked on repeat. Multiple choice answers gave space for people to respond either honestly, or ironically. But what was surprising in both cases was how thoughtfully and honestly people generally answered, and how these answers, fed back as ‘data analysis’ towards the end, did actually function as a kind of litmus test of the community of respondents in that time & space.

SCREENGRAB of DATA ANALYSIS FROM BRIGHTON – 8/6/19 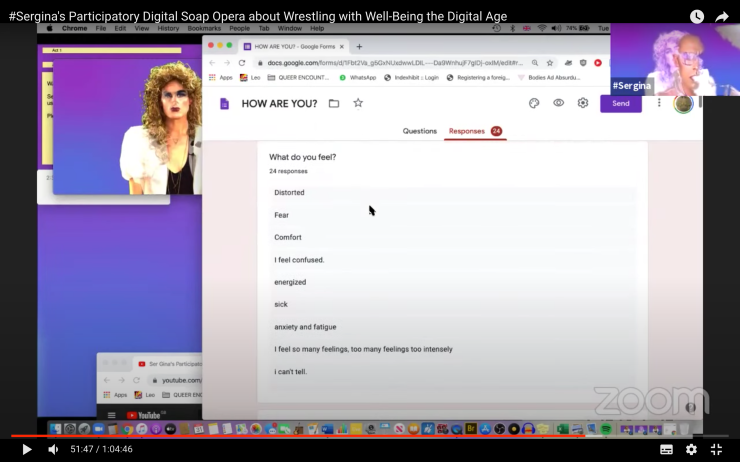 An interesting – and surprising – outcome of the online edition was how connected participants reported to feeling with others in the Zoom room. This was in contrast to ONCA, where several visitors admitted to feeling afraid of entering the back space of the gallery, and did not interact with each other very much at all. Online, chat was going on between Zoom participants throughout the performance, and also between the ‘voyeurs’ on YouTube. In this way, the digital format enabled and facilitated communication (jokes, predictions of where the performance may go and so on) that did not and could not have happened in the same way in the gallery. While the online performance work I’ve been doing for #Sergina over the past few years has proven (more than once) how intimacy can build up between a group of performers working across space and time zones, the response ‘who were the other participants? They were so nice!’ in this performance was something neither I nor Vladimir expected. It proved that, in some cases, even between strangers, remoteness can result in closeness that can be both intimate and inclusive.

The HOW ARE YOU performance was conceived as a way of exploring the feeling that in our increasingly digitally-mediated, platform-dependent world, our bodies and our preferences, our opinions and our declarations of well-being (or not) are valuable in the end only for their potential to generate data – which in turn is sold back to us. A bot will ask ‘how are you doing today?’ But does it hear the answer? Equally, is someone in a call centre ever really allowed to go off-script to truly listen if an unexpected response is offered? Whilst today may feel a million miles from where we were five weeks ago, l would argue that we have been in in training for this for a long time. Which means we do have the tools to get through this. Real connection online is possible. Whilst we miss touch and physical co-presence, and none of us would wish this lockdown situation to go on any longer than it has to, temporal togetherness, enjoyed from the intimacy of our homes, driven by a strong desire (and need) to connect with others, can bring us together in ways we might not have known before.

In the meantime, we need to find ways to reinject meaning into the question ‘How are you?’ And to have the time and the courage to hear what comes back.

Elly Clarke is interested in the role, performance, value and burden (‘the drag’) of the physical body in an increasingly digitally-mediated world. She explores this through video, photography, music, writing & community-based projects and #Sergina, a border-straddling, multi-bodied drag queen who, across one body and several, sings and performs songs online and offline about love, lust and loneliness in the mesh of hyper-dis/connection. Some of these songs make it onto records released by Berlin-based record label Wicked Hag (with forthcoming EP – Datafic(a)tion – due to be released this summer). Clarke is a second year Chase DTP funded PhD researcher in Art at Goldsmiths and has shown work at venues that include Franklin Furnace, New York; The Lowry, Salford Quays; Kiasma, Helsinki; Milton Keynes Gallery; ONCA, Brighton and Galerie Wedding, Berlin. #Sergina (together with Vladimir Bjeličić) was also supposed to perform this year at Roskilde Festival, but now won’t, for obvious reasons…   http://www.ellyclarke.com

Vladimir Bjeličić (b. Belgrade, 1983) graduated from the Faculty of Philosophy at the Department of Art History and is active in the field of independent curatorial and artistic production. As well as being the author of numerous critical articles published both in print and digital media, Bjeličić expresses his research through different performative practices. Since 2015, he has been collaborating with British artist Elly Clarke on #SERGINA, which is based on a survey of post-physical gender identity and sexuality on the Internet. Together with Senka Latnović, Bjeličić runs post curatorial formation Vocal Curatorial Syndrome, and is one of the founding members of drag based collective Ephemeral Confessions. In brief, Bjeličić’s work revolves around the politics of representation of corporeality in contemporary art, especially in the domain of performance art. http://cargocollective.com/vladimirbjelicic

This is the third in our Feminist Everyday Lockdown Blog Series. Lockdown is a feminist issue, and sharing stories is a feminist practice. We are calling for further contributions to the CHASE Feminist Network blog on everyday feminism and lockdown. This includes creative, political, and personal reflections!

Read previous Feminist Everyday Lockdown Blogs: Flat, Flat, Flat by @marianasra who we thank for sharing her story of waiting, being and uncertainty in lockdown, and Finding Rest During Covid-19 Lockdown: Rejecting Capitalistic Productivity by @dr_ogbemudia good advice on “spending” time, and finding time to ‘be’!

This work is licensed under a Creative Commons Attribution-NonCommercial-NoDerivatives 4.0 International License.